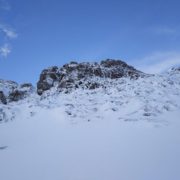 It was a team West Coast Mountain Guides adventure on the West Face of Gearr Aonach today, with both Ken and Steve taking their teams up the two variations of the atmospheric and often overlooked 999.

Ken and Cammy took the left-hand variation, which takes a direct line, straight up a steep chimney groove, and over a number of chock-stones. The lower pitch could do with a bit more consolidation, but the upper two pitches were much better, offering secure axe placements when needed.

For Cammy, whilst this was a step up in terms of difficulty to his previous climbs, he adapted well to the steeper and more technical climbing. For the record, 999 is probably closer to IV,5/6 rather than the III it’s given in most guidebooks.

Steve, Neil and James climbed the first pitch behind Ken and Cammy before breaking right up a nice grade III gully. The snow wasn’t quite bonded enough for good axes so a delicate and sometimes determined approach was needed to make upward progress. All in all a fine day to be out in the Highlands!