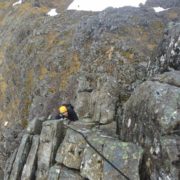 Ken: After a couple of weeks of ski touring, with friends, in the Vanoise region of the Alps, I was back out on Ben Nevis today, this time with Eric, who is putting in some mileage in preparation for an attempt on the Matterhorn later this summer.

With quite a bit of snow melt in progress, we crossed the Allt a’Mhuilinn above the CIC Hut, and traversed beneath Carn Dearg to get to the start. Here we bumped into a horde of skiers, who were out to ski some, if not all, of the gullies between them.

The weather held off, and whilst the rock on Castle Ridge was mostly damp, it was drying out in places, and provided plenty of opportunities to practice careful footwork. On topping out, we bumped into Mark and Nadir, who were getting shots of skiers dropping into South Castle Gully. We also saw some skiers on the hanging corrie that sits above the Shroud (look closely at the photos!). It’s certainly not a place to take a tumble!

We ventured to the summit, before catching a ride down the Red Burn, which is still chocked full of snow, which is quite firm in places. Crampons not essential today, but an axe was useful.

If you fancy a guided day on Castle Ridge, or on one of the other fantastic ridges on Ben Nevis this summer, get in touch!