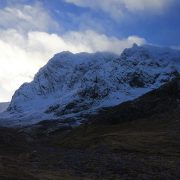 Yesterday brought further snow to Ben Nevis, and it's really whitened the crags and started filling in the gullies. The snow is still largely unconsolidated, and unfortunately, we're due a bit of a thaw tomorrow, which will strip much of it away. That said, winter normally has a couple of false starts each season, and we should be grateful for how good it's been over the past week or so.

Marc, Alex, Ian and Adam are good friends from their school days, and had managed to find the time to come up together and tackle Ben Nevis. They were after something adventurous, so we made an ascent of Ledge Route, one of the best mountaineering routes in the area. The weather was near perfect for much of the day, and the recent snows have covered many of the icy patches that were starting to form on the approach to the route. Crampons weren't required today, but an axe was helpful, as many of the handholds were buried.

We wandered over to the summit, and caught a glimpse of the only other team on the north face today; Malcolm and Phil (both fellow Mountaineering Instructors and regularly work for West Coast Mountain Guides), who were half-way up Gargoyle Wall. They reported good conditions on the route but commented that the approach was tough going.

Sheltered on The Spur, Sgurr an Fheadain, Skye
Scroll to top