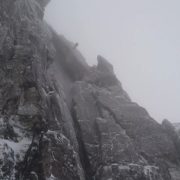 Making the Most of it

Steve and Ken had a rare opportunity to climb together yesterday. They went to Church Door Buttress but unfortunately the cracks were so chocked with ice that steep mixed climbing was out. They made the most of the day by climbing West Chimney which is a great route and slightly stiffer since a rock fall a few years ago closed the cave pitch. Steve had done the new variation but as Ken hadn’t climbed the route in years got the pleasure of leading the difficulties on P2. There is some forum chat about the grade but V,6 is probably accurate after the rock fall. The pair made an exciting abseil outside the great arch that forms Church Door Buttress as another team (who had also decided against their main objective) climbed/caved up Crypt Route.

‘The Scottish ‘Alps’
Scroll to top