I thought that I had a bright idea of starting early this morning to then finish early, and be down before the thaw and rain hit this afternoon.  It turns out that Matt, who was out with Michael for their second day, had a brighter idea, and started shortly after us, ensuring there was a track all the way in to and along the East Ridge of the North Buttress of Stob Ban.  Work smart, not hard.

Nick had to leave us after yesterday, due to family commitments, so Keith and I set off for what we hoped would be a quick hit, before the worst of the rain and thaw hit this afternoon.  As we were first in the car park, we ended up ploughing our way, in what started off as clear and calm conditions, to the East Ridge, noting a number of avalanches that had clearly occurred recently out of the higher east facing gullies.  Fortunately, the approach to the East Ridge is relatively safe due to the lesser slope angles, lower altitude and opportunities to remain on and link ‘islands of safety’.

Having climbed a fair few harder routes, Keith flew up the route, but enjoyed the flowing nature and easier moves that the ridge presented.  On topping out, we decided to ‘bag the Munro’, so with goggles on (first time for me this year), we carefully made our way over the snowy crests and subsidiary tops, before reaching 999m.  The weather had turned by this point, with an increase in the winds and decreasing visibility, so we didn’t hang around and made a quick descent down the north ridge, closely followed by Matt and Michael.

Tim was out with Jamie, attempting Ben Nevis via the Mountain Track.  They did well to get to 1040m, but with deteriorating conditions made the right decision to leave the summit for another day.  Sometimes, the best decision in the mountains is to turnaround.

Rod and his team of mountaineers made a snowy and successful ascent of the East Ridge of Beinn A’Chaorainn, which is generally very well sheltered from strong W/SW winds.  Again, the approach is relatively safe, as a direct route to the ridge from the forestry tracks avoids any avalanche prone terrain.

Clear and calm on the approach. It didn’t last!

Lots of snow on the E Ridge of the N Buttress

On the summit of Stob Ban

Matt and Michael finishing the route. 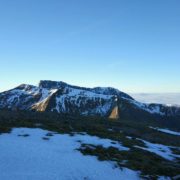 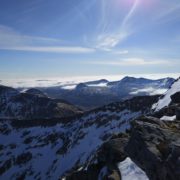 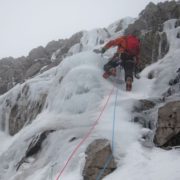