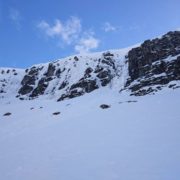 Ken: The ice is holding on on Beinn Udlaidh, but only just. Dave and I had a quick hit today, and climbed Ramshead Buttress. The ice on the steeper sections was generally fine, but the snow lying on the easier angled ground, between the steeper ice, was variable, and required a bit of care. Only one other team in the corrie today, and they made fairly short work of Quartzvein Scoop. The ice should survive the next wee thaw.

Meanwhile, our CIC Hut Teams have been getting stuck into classic ice climbs on Ben Nevis. Steve and his team climbed Green Gully, which was in great conditions, and left them with smiles all round. Stu and his team were firing on all cylinders and climbed Sickle, Central Gully and Central Gully Right-Hand. Not a bad haul at all.

Also climbing on the Ben were Andy and Jon. They climbed Glover’s Chimney, and continued up Tower Ridge to the summit.

It felt like spring in the valleys, but with all the ice that’s around up high at the moment, this promises to yield great late season ice climbing, well into April and possibly beyond!