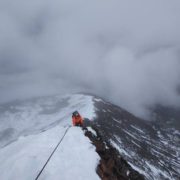 Ken: Today didn’t turn out to be quite as wet as expected, but there’s no denying that we’ve got a thaw in progress at the moment. That said, with temperatures due to drop from tomorrow onwards, this is no bad thing, and if anything is just what we need right now, to bed down some of the vast amounts of existing snow.

I was out with Freya, Rich and Tom, who are on our 5 day Winter Mountaineering Course. We kicked the week off with an ascent of School House Ridge, focusing on the appropriate use of the rope and simple belay systems. The team did well, and were able to start transferring their existing hillwalking and summer climbing skills to the winter environment. The ridge has suffered from the thaw, with south facing side of the ridge considerably stripped of snow. The north facing slopes are still very snowy by comparison. The summit ridge of Sgurr Bhan was also rather bare. We descended Coire Riabhach using that all important winter mountaineering technique, the bum-slide, and what a brilliant bum-slide it was too! Caspar was also out on School House Ridge, with Rob and Helen, also focusing on sharpening their winter mountaineering skills.

Over on Aonach Mor, we had a few teams on the West Face of Aonach Mor, on the various summit ribs. They reported damp conditions, but the turf is still well and truly frozen up there.

The forecast for the foreseeable future is for cold temperatures to dominate, and with a damp snow pack, this will really do things wonders, and we should have some pretty amazing conditions returning very soon! Exciting stuff ahead!