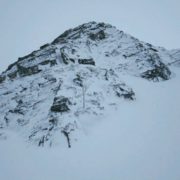 Ken and Ryan headed south today to Beinn an Dothaidh. Without the pressure of other teams, they first decided to climb up the crest of the small cone shaped hillock, mentioned in the approach desription in the guidebook. This gave a surprisingly good 40m pitch of abut III,4. They then continued into the cloud and up to the main crag, where they climbed Cirrus. The ice on the first couple of ice falls wasn’t brilliant, but good enough to climb, but not without needing to throw a few shapes.

With a bit of coaching from Steve; Chris and Michael led themselves up East Ridge of North Top Stob Ban. They strung 5 pitches out swinging leads which resulted in a gradual progression to becoming an efficient team. Great weather overall with super views and very little snow and wind throughout the day.