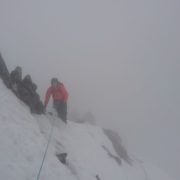 The cloud had rolled in overnight shrouding most of the hills by day break. Thankfully there wasn’t much precipitation falling from the sky but things felt damp and slushy both on Ben Nevis and in Glencoe.

Steve and Nick scrambled up the Zig-Zags along Gearr Aonach and into the Coire where Nick was introduced to ice axe breaking and techniques to get around safely on snow. They then climbed a somewhat rocky Dorsal Arete which resembled jenga in the current thaw. They bypassed the narrow crest before climbing back down Broad Gully which eventually turned into an epic bum slide to the coire floor.

Ken and Caroline were over on Ben Nevis where the day started off nicely, but unfortunately, the clouds rolled in once they were established on Tower Ridge. The steeper steps are now largely bare, but there’s still a lot of snow on the easier angled ground, and in particular the section that traverses across the top of Fawlty Towers is quite an impressive crest of snow. Much of the climbing is fairly straight forward in these conditions. Tower Gap was largely free of snow. There was one other team ahead, but other than that, it was a very quiet day on the mountain.

Skiing on the West Face of Aonach Mor