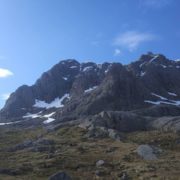 Ken: I’m back in Lochaber this week, and was out with Steve today. Back in October, Steve and I climbed Tower Ridge, but due to the weather, we weren’t treated to many views (or much dry rock), so we were back on Tower Ridge today, this time enjoying it in all its glory.

Due to an awkward looking large patch of snow, with a steep snout, sitting in the East Gully of the Douglas Gap, we traversed onto the ridge slightly higher up, and spent much of the rest of the route on dry rock. We crossed a couple of small patches of soft snow before the Eastern Traverse. The Eastern Traverse itself was snow free, but a sizeable patch of snow meant we climbed the Fallen Block Chimney on the outside.

Once above the chimney, it was dry rock almost all the way, with only a slight detour required on the exit gully to avoid some firm patches of ice. We didn’t need crampons at all, but used axes for about 5m or so.

The Red Burn still provided a quick descent, but the snow is getting quite thin lower down.

If you fancy a day of private guiding on Tower Ridge, visit: https://westcoast-mountainguides.co.uk/courses/tower-ridge-guide/