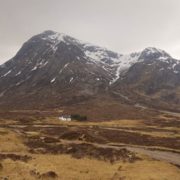 Ken: The weather turned out to be much better than the forecasts suggested; the winds decreased through the day and the rain held off. I was out with Sebastian, working for Peak Mountaineering. Sebastian was up in December, during a particularly cold snap, so today’s conditions were quite a contrast. We climbed Curved Ridge on Buachaille Etive Mor, which consisted of dry rock for much of the way. We continued across to the foot of Crowberry Tower, where an axe was useful (crampons not required), and climbed to the top of the tower, before abseiling off. The upper slopes were quite soft, and again, didn’t require crampons. We enjoyed a brilliant bum slide almost all the way down Coire na Tulaich.

Just round the corner, Steve and Nick rounded off 4 great days of adventure, with an ascent of North Buttress, which is quite loose at the moment. Careful footwork was needed to avoid tumbling blocks on every pitch but it was really enjoyable climbing on our own in the sunshine; Nick had a great day, and the four days have been a great warm-up for Nick’s trip to the Alps this summer. They stripped the route of all the cord left over from winter so if you’re planning on rapping bring along some tat.