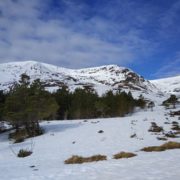 Ken: Whilst the freezing level has remained above the summit for a few days now, the lack of rain has ensured that snow loss up high has been fairly minimal. I was out working for Abacus Mountain Guides, with Robert, who has been inspired by Gary Smith’s new guidebook: Scotland’s Winter Mountains with one axe (if you’re an aficionado of winter mountaineering, then it’s well worth buying), and as a result, we headed to the East Ridge of Beinn a’Chaoriann.

The track through the woods is largely clear of snow, allowing quick and easy access, but thereafter, there is still a lot of the stuff. The crest of the ridge lower down has suffered from all this good weather, but a steep, open gully on the right allowed us to stick to snow for much of the way.

Thereafter, it was fairly easy going, but there are still some patches of firmer snow up high. The cornices either side of the ridge are quite impressive, and won’t hang on for much longer! This was my first time on Beinn a’Chaorainn where it was clear, so we both enjoyed absorbing the views from the summit.

Grey day on the Grey Corries
Scroll to top