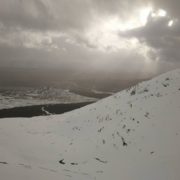 Ken: With a rather windy forecast, it was a team West Coast Mountain Guides ascent of the East Ridge of Beinn a’Chaorainn today. It’s a particularly well sheltered route from SW/W winds, and so whilst we were blown about a bit on the approach, we were soon on the ridge, and tucked well away from the worst of it.
I was out with Liere and Ian, who are up to work on their winter mountaineering skills. They led themselves up the ridge, with me alongside offering coaching and guidance along the way. Meanwhile, Steve was out with Nick again, who commented that it wasn’t a proper winter climbing trip without experiencing the wind and rain! We did witness (from a distance) some substantial cornice collapse from the corrie rim, and resultant avalanches, which gave our teams a healthy lesson in staying well away from enclosed corries and underneath cornices during periods of thaw.
The weather was quite mixed, but we did enjoy some reasonably dry periods, and even saw blue skies at one point. Conditions on the route were reasonable considering the thaw, and as you can see from the photos, there’s not a lack of snow up there!
https://westcoast-mountainguides.co.uk/wp-content/uploads/2018/01/east-ridge-of-beinn-achaorainn.jpg 540 720 Ken Applegate https://westcoast-mountainguides.co.uk/wp-content/uploads/2014/10/logo_wcmg.png Ken Applegate2018-01-27 19:46:322022-05-10 08:31:57East Ridge of Beinn a’Chaorainn
0 replies