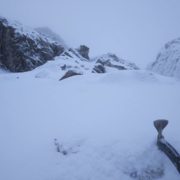 Yet more snow fell down to sea level last night. I was out with regulars Keith and Nick and we decided to tackle the lesser-travelled Gendarme Ridge on Stob Ban. Whilst there was quite a bit of deep snow on the approach, we were able to avoiding any avalanche prone terrain, mainly due to fact that the route starts quite low down, but also we were able to tuck ourselves beneath the bulk of Central Buttress in order to get to our route.

The route takes a striking line up a slender rib of quartzite, with the first pitch offering the crux of the route. The uniform covering of snow, which hid the quartzite slabs (as well as useful turf and vegetation), made route finding and gear placements a bit awkward, and so climbing the first pitch took a bit of clearing and digging. After that, the route eases back a bit, and takes in a series of pretty atmospheric ridges that eventually top out on the summit of Central Buttress. We then descended the north ridge.

Also on the mountain were Dave and Caspar, with a team from Wessex Mountaineering Club, who were looking to develop their avalanche awareness. They used the Be Avalanche Aware model as the foundation for the day.

Hannah was out on Buachaille Etive Beag, on day one of our Winter Skills Course. Their day was based on using the boot as a tool, something often overlooked. There are plenty of occasions where kicking steps without crampons on makes more sense than resorting to putting crampons on. They also took in the summit of Stob Dubh.