Last week, Mark S and I ran a five day long winter climbing course based out of the CIC Hut on Ben Nevis, which is Britain’s only true alpine hut  and gives unrivalled access to the some of the finest winter climbing cliffs.  The weather decided to play ball  for much of last week too, enabling Neil, Mark C, David and Jeff to climb a number of classic winter climbs.

On Monday, under blue skies and sunshine, Mark S, Neil and Mark C climbed Minus 2 Gully, which they reported to be in great condition.  Neil and Mark C had climbed on Ben Nevis many times over the years, but hadn’t climbed NE Buttress before, so the team continued to the summit via the buttress, taking in the Mantrap (the single hardest move on the mountain?!) and the Forty Foot Corner.   On the other side of NE Buttress, on the Little Brenva face, Jeff, David and myself were basking in the sunshine, whilst climbing Cresta Direct before traversing to finish up Moonwalk, therefore linking some of the steeper ice pitches in the vicinity, giving a very alpine feel to our day.

Red sky in the morning…

The CIC Hut, beneath the cliffs of Ben Nevis

The following morning, we woke to slightly murky conditions, and so opted to stay low and made a group ascent of The Curtain, which was in reasonable nick, if a little thin on the first pitch.  David and I then made our way over to have a look at Vanishing Gully,  by which point the freezing levels had crept up causing the approach slopes to start to feel a bit spooky, and as a result, we chose not to push on up steepening slopes that lead to the foot of the route.  Mark S, Neil and Mark C climbed the first pitch of Gemini that afternoon.

Wednesday brought with it another settled day, so wanting to make the most of it, Jeff, David and I started early, in order to beat the crowds, and broke trail all the way up a very snowy Tower Ridge.  The clouds hung around during the first half, but soon cleared to give another fine day. There’s something quite magical about being the first team on Tower Ridge, and not having a track to follow.  We then descended Ledge Route, from where some of the best views of the mountain are to be found.  Mark S and his team climbed Observatory Buttress, and found the easier angled pitches above the crux to be hard work, with plenty of unconsolidated snow lying beneath a thin, icy crust.  That said, they still enjoyed themselves on one of the finest ice routes on the mountain.  A team also climbed Zero Gully that day.

David and Jeff on The Eastern Traverse, Tower Ridge

Thursday promised another fine day, so Mark C, David and myself started early, and made an ascent of one of the most iconic ice climbs on Ben Nevis, Orion Face Direct, which at 420m is also one of the longest.  We enjoyed a clear run all the way, with near perfect conditions throughout.  The crux traverse was so well iced that it felt quite easy for the grade, the second pitch of the route giving the steepest and most sustained climbing of the day.  Other teams on Astral Highway, Minus 1 & 2 Gullies and Observatory Buttress.  Mark S and Neil climbed Vanishing Gully and Waterfall Gully that day.

Above the second pitch of Orion Face Direct

Clear views in every direction

Looking over towards the summit of Ben Nevis

Waking up on Friday, having been listening to the rain and wind beating down through the night, it was quite evident that there was no way that the climbing would match that of the previous few days, and so after a leisurely breakfast or two, we made our way down and made the most of Fish Friday in Whetherspoons on Fort William High Street.  So, despite not climbing on the final day, it was a nice way to end what has been a great week, with fun company, amazing conditions and a good haul of winter climbs.  I’ll be back up at the CIC Hut next Sunday for another five day course, fingers crossed for such good conditions then! 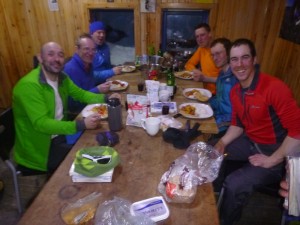 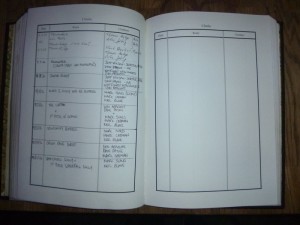 Yesterday, the company was great, but conditions less so.  I was out with Barry and Radu, and with a thaw in progress, we went to one of the most snow sure mountaineering ridges in the Highlands, the Forcan Ridge in Glenshiel.  The ridge was quite bare lower down, but improved with height with snow encountered for much of the route to the summit of The Saddle.

Ptarmigan, on the approach

Barry enjoying himself on the Forcan Ridge

One of the many trickier steps on the Forcan Ridge

At the summit of The Saddle, Glenshiel

Other West Coast teams out over the past few days, including Tom who was out with the Branch family.  They enjoyed two mountaineering days on School House Ridge in Glencoe on Friday and the Dubh Ridge to the Climber’s Col on Aonach Mor on Saturday.  Rusty was out with Arran and Dave.  They climbed Fawlty Towers on Ben Nevis on Friday, and were on Stob Coire nan Lochan yesterday.  Finally, Scott was out with Michael and Marion yesterday, in Glencoe.

So, what about this coming week?  A high pressure system is set to dominate for much of the week, which will give clear skies and so warm days, but cool nights, which will firm up the currently rather soggy snow pack.  Heat loss through night time radiation should also help firm up the ice, although early starts may be necessary to make the most of the cooler temperatures.  Some of the thinner ice routes (Gemini, Mega Route X, Minus 1, Orion Direct etc.) will have suffered as a result of the thaw this weekend, but the major drainage lines (Hadrians, Point 5, Green Gully) should remain climbable once those cooler nights come around.

Some interesting reading regarding this current high pressure here: 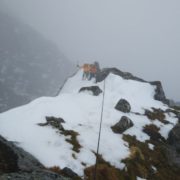 Not as good as yesterday: Golden Oldie, Aonach Mor 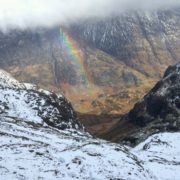 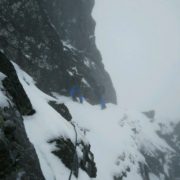