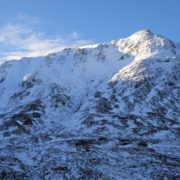 Ken: It’s been a brilliant weekend in the Scottish Highlands, with some amazing weather, particularly today, and some great winter climbing conditions to be had. Yesterday, I was out with just Nick, whilst the other two had a cultural day. We headed up to Stob Coire nan Lochan, which was in the clouds for much of the morning. It was clear that it was busy up there, but tricky to tell where folk were, but we managed to find Twisting Grooves free, and so had good fun on that.

Today, Nick, Allan, Andy and myself managed to avoid the crowds, and climbed Inglis Clark Ridge on Stob a’Ghais Choire. Whilst all the car parks in Glencoe were full, we shared the ridge with one other team. The main icefall that forms on the first pitch wasn’t there, but the rest of the route provided enjoyable mixed climbing throughout. There is a bit of scope for variation on the route, but we tried to stay as close to the crest as possible.

Steve, Bridget and Winnie also had a great day climbing Faulty Towers today. Conditions were good higher up but the entry pitch was steep, cruddy and bold bringing an imbalance to the route. Ben Nevis was like a Christmas cake with climbers getting amongst the classic V’s, many queues were formed but if your going to wait for your turn on any day then this was a day to do it. Teams on Orion Direct, Point Five, Observatory Buttress, Observation Ridge, NE Buttress, Hadrian’s Wall, Zero Gully, Tower Ridge, Slab Climb and many more!

CIC Hut: 5 Day’s of Winter Climbing in the Shadow of Ben Nevis