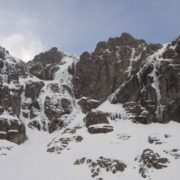 Ken: Two contrasting days for our two CIC Hut Week teams today. Myself, Pete and Ivo climbed two lesser travelled routes; Jubilation and then Fore n’ Daft. Both routes were great fun, with plenty of excellent ice to climb. We were in the sun whilst climbing Jubilation, which made it all feel pretty alpine. The first two pitches gave fairly sustained ice, before a straightforward snow slope brought us to a final pitch of grade IV ice, which Pete led. We then descended No. 4 Gully, and climbed Fore n’ Daft, which definitely warrants one star, and gave two pitches of absorbing (and surprisingly steep) ice climbing before we gained the final slopes of North Gully.

Meanwhile, Niels, Graham and Meirion climbed two classics; Comb Gully and The Curtain, both of which were in great condition.

There were quite a few teams on Vanishing Gully and Italian Right Hand. The weather was nowhere near as bad as some forecasts were suggesting.