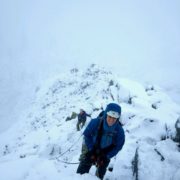 It’s been another great day in the Scottish hills today, and the snows continued to fall, albeit only lightly, through the day. First up, Steve was out working for us today. He was out with Lucien, who hadn’t climbed on Ben Nevis before. With much of the rock covered in soft snow, the obvious choice was an ascent of Tower Ridge, which Lucien thoroughly enjoyed, and felt that he couldn’t have asked for anything more. There’s no finer way to be introduced to winter climbing on Ben Nevis!

Next up, Hannah, Lena and Mark enjoyed another day of fun climbing. After a long day yesterday, they opted for the gondola served East Face of Aonach Mor, where they climbed The Guardian IV,5. They reported good, absorbing climbing and an interesting off-width chimney on the second pitch.  Seeking out lesser known routes in the current conditions is no bad thing, as it will probably mean avoiding loose debris being knocked down from above. 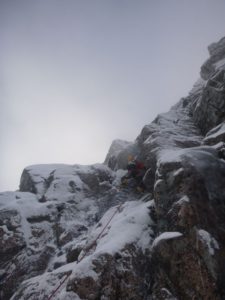 Mark setting off up The Guardian 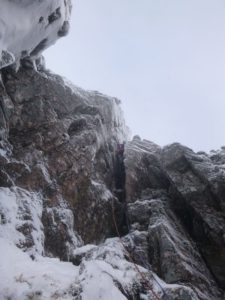 Hannah emerging from the off-width chimney.

Lastly, I was back out with Rob and Ruth from the University of Manchester Mountaineering Club, working for Hebridean Pursuits. Ironically, we chose to not seek out a lesser known route, and climbed Ledge Route, whilst focusing on alpine ropework. Actually, despite quite a few teams in the vicinity, there were no hold ups, and everyone climbed efficiently and courteously. We then descended into No. 4 Gully by abseiling in off a snow bollard, and found a good boss of ice to practise placing ice screws.  Over the weekend, Rob and Ruth have been able to add many more skills to their climbing and mountaineering toolbox, which I’m sure they’ll look forward to putting into practise in the future. Thanks to both of them for a great couple of days! 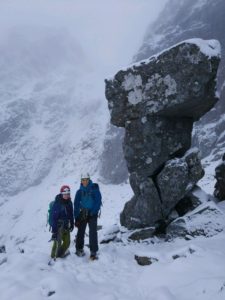 Rob and Ruth by the gravity defying block on Ledge Route 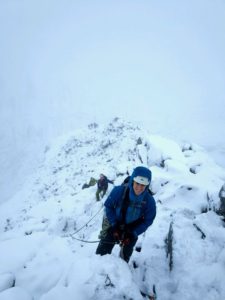 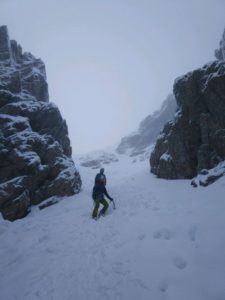 Plenty of teams out and about, mainly sticking to the ridges and easier gullies. We did see a team low down on Green Gully as we left the corrie this afternoon. It looked fairly lean. There was significant rock fall in No. 3 Gully this morning, reinforcing the need to be aware as we’ve not had any freeze/thaw cycles since the fresh snows arrived, so many blocks aren’t well bonded in place yet. 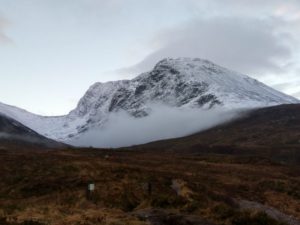 Nice end to the day