Please excuse the lack of blogs recently.  Hannah and I were away ski touring in the Ortler Alps, in Italy for a good chunk of this month, so will blog about it when I get the chance.  Generally great conditions, although the weather did deteriorate as the trip progressed.  Still, it was very nice to get plenty of skiing and summits under the belt.

I’m sure that most of you are well aware that winter is not just holding on with the very tips of its fingers, but has its hand firmly clenched around The Highlands, including coastal regions and islands, at the moment.  We’ve had a number of snow showers recently, down to sea level at times.

Today, Simon, Peter and I made the most of the current conditions, and made an ascent of Golden Oldie on the West Face of Aonach Mor. Both Simon and Peter have ambitions to scale higher peaks in the Alps and The Greater Ranges later on this year, and felt that squeezing in a trip up to Scotland would be useful preparation, not to mention fun in its own right.  They both cruised their way up, whilst paying attention to belays and ropework along the way, all of which will prove useful for their future trips.

Looking north from the West Face of Aonach Mor

The skies cleared nicely in the afternoon.

On the summit of Aonach Mor, with Ben Nevis in the background

Looking west from Aonach Mor. Plenty of snow visible on the Isle of Eigg!

The recent easterly winds have deposited quite a bit of snow on the Summit Ribs, ensuring good cover throughout.  The turf, particularly where exposed was nicely frozen too.  The gullies running parallel to Golden Oldie are quite laden with snow, and would give great ski descents at the moment, it’s just a shame that the lifts beyond the gondola aren’t running.  The summit plateau of Aonach Mor currently has much more snow on it than it did for all of winter, with the summit cairn only just visible at the moment.  Not another soul beyond the Snowgoose restaurant at the top station.

Today I was working for Atlas Mountaineering. 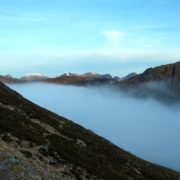 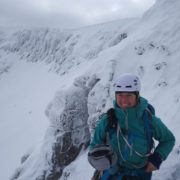