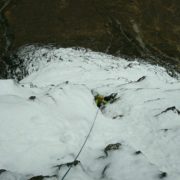 Both Steve and I headed to North Buttress on Buachaille Etive Mor today. He was out with David, and I, again, with Lukas. Knowing that the weather at some point was going to turn, we had a fairly early start, with plan A to get the main pitches climbed and then to abseil back down the route.

As it transpired, the weather was remarkably calm during the climb, so much so, that we decided to push on to the summit of Stob Dearg. Even once on the summit, the winds were fairly calm, although a couple of healthy gusts on our descent to the rim of Coire na Tulaich reminded us not to drop our guard.

Back in the Fort now, and the rain and wind has definitely kicked up a notch or three.

Conditions on the route were ok, but the current thaw is starting to take its toll on the snow. That said, it’s still very wintry up high, and will cool back down early tomorrow morning, which will also bring with it plenty of fresh snow. This should bring with it some great climbing conditions later this week.