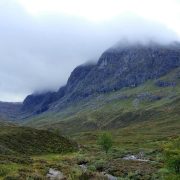 Today, Paul and I tackled one of Ben Nevis' great mountaineering routes; North East Buttress. North East Buttress is the most striking feature when walking up the Allt a' Mhuilinn, and is a hugely popular winter climb. It sees far less traffic during the summer months, but still give's an excellent day out. When damp, the rock is quite slippery, so a bit more traffic outwith the winter, to clean the rock up, wouldn't go amiss!

From the initial traverse to gain the crest, to topping out on the plateau, the route doesn't let up, with plenty of interest and tricky moves throughout, however, the crux section, the Man Trap and Forty Foot Corner are both significantly harder than anything else, and come right at the top of the route.

Whilst the weather was largely dry, the rock was still fairly damp, and both Paul and I had to climb quite carefully, particularly with regards to foot placements.

The weather closed in a bit as we reached the summit of Ben Nevis, and we made a quick descent via Coire Leis.
A few teams on Castle Ridge, Ledge Route and the CMD Arête today.

Sgurr Mhic Choinnich, The In Pinn and Sgurr na Banachdich