The day started with the rain lashing against the windows, and a thick blanket of cloud lying just a few metres above sea level, however, with a forecast suggesting a huge improvement from about 9ish, Andy, Hazel and I had a leisurely start, which was just as well, as they were therefore able to enjoy their cooked breakfast at the Lime Tree this morning.  By the time we were walking into Ben Nevis, the clouds had already lifted, revealing a very white mountain.

Plan A was the SW Ridge of the Douglas Boulder, which looked nice and white.  There was thin layer of windslab on the approach, but easily penetrable, down to the much older snow beneath.  The ridge was covered in fresh snow, so despite the lack of firm névé, was still very wintry. A bit of care was required with the odd loose block, but generally the climb relies on sinker hooks, and so didn’t require moves using loose blocks to make progress.

Andy and Hazel have mainly climbed ice when out in winter, so had to adapt some of their experiences to make the most of the cracks and tiny ledges for feet, as well as making the odd move with hands rather than axes.

It was eerily quiet on Ben Nevis today, with one team who headed round to NE Buttress, a set of tracks to and from the base of Hadrian’s Wall, one team who headed up to The Cascade and a couple of teams looking at skills in Coire na Ciste.  With the freezing level remaining at 800m or so for the next wee while, the snow will continue to consolidate, and should give good climbing conditions this week… Winter continues!

Good cover of snow on the SW Ridge of the Douglas Boulder, Ben Nevis

Hazel enjoying the mixed climbing on the SW Ridge 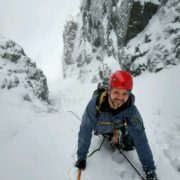