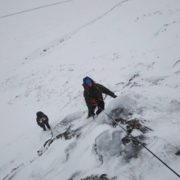 For the past couple of days, I’ve been out on a winter mountaineering course with Alex, Tobias, Jimmy and Greg. With a rather wild forecast (and snow conditions) yesterday, we decided to play it safe, and made an ascent of the Pink Rib on Beinn a’ Chrulaiste in Glencoe. This gave the team a chance to practise cramponning up tricky rocky steps low down and equally tricky ice smears and bulges higher up. The descent down the western flank on the mountain was tough going, with plenty of hard packed snow to have to wade through!

Today, the team led themselves up School House Ridge, above Ballachulish. The current thaw has stripped back quite a bit of snow, particularly on the steeper rocky steps, but the shallower angled sections are still holding on to quite a bit of snow. The snow has firmed up above 850m, and so the final section to the summit of Sgorr Bhan was on the type of consolidated, firm snow that we’ve been longing for for sometime! It was remarkably pleasant on the summit, so much so, that we stopped for lunch up there!

For James and Neil’s final day with Steve yesterday the team took a wander towards Stob Ban in the hope of using the East Ridge of the lower North Top to coach some leading. It was soon obvious the wind had swept allot of the soft snow into the glen and consequently obscured the path. The volume of snow was significantly enough to be wading chest deep and getting nowhere fast. Plan A quickly became B and then even quicker became plan C – a trip to the Ice Factor where the guys enjoyed some steep ice training and plenty of classroom demonstrations on building belays.

Dave A was out with George today, they enjoyed a mountaineering day on the southern flanks of Meall Cumhann in Glen Nevis. Again, a good and safe option considering the recent conditions.

Dave B was also on School House Ridge today. He was running the first day of a winter climbing course with Gregor and Richard.