For Lee’s final day, we thought it would be a shame for him to miss out on climbing on Ben Nevis, so we went there, and climbed the brilliant Green Gully.

Overnight, a fresh blanket of snow had covered the mountain down to low levels but proved to be fairly easy to walk through.  In Coire na Ciste, there was already a team established on the SW Ridge of the Douglas Boulder, and another walking away from Vanishing Gully, which may have still been a bit cruddy due to yesterday’s thaw.  We pushed on, passing teams setting off up a fun looking Curtain, which looked particularly good in the brief sunshine this morning.

We climbed Green Gully in five pitches, each giving its share of interest.  The steeper sections on the lower pitches were reasonable, but wouldn’t have taken screws.  The best ice was to be found on the direct finish at the top of the climb, giving a steady pitch of solid, blue ice.  We seemed to share our route with plenty of spindrift, which at times was pouring down the gully, but as the visibility closed right in at around mid morning, we didn’t see anyone else in Coire na Ciste, so have no idea whether anyone else followed us up.

We popped over to the summit, in almost complete white-out conditions, and whilst taking refuge in the summit shelter, were joined by an Italian team who had climbed Moonwalk on the Little Brenva Face, and reported great conditions there.

Nick was out in Glencoe with Dave and Adam.  They climbed North Buttress on Buachaille Etive Mor, which they all enjoyed.

A nice start to the day.

The sun hitting the Curtain as moody skies form above

Lee enjoying Green Gully, in between the plumes of spindrift!

Full-on conditions on the summit plateau! 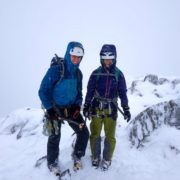 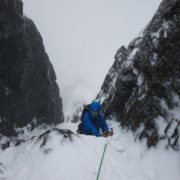 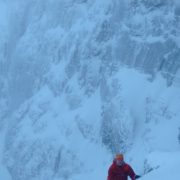