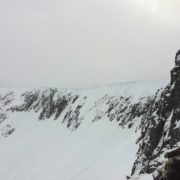 Ken: The freezing levels didn’t drop quite as low as expected, but that didn’t stop Henry and his Advanced Winter Climbing team and Dave with Ian and Matt from seeking out some great climbing.

Henry and his team abseiled into the East Face of Aonach Mor, where they climbed Roaring Forties, which they found to be in pretty good condition, particularly after the first pitch. This climb had a bit of everything along the way, from chewy ice through to turf and mixed climbing and gave Rod and Kevin a varied and interesting climb. Other teams on Left Twin, Turf Walk and Morwind.

Over on Curved Ridge, Dave and his team found the approach to Curved Ridge tough going, with plenty of soft avalanche debris to wade through. Luckily, conditions on Curved Ridge more than made up for this, with great conditions all the way. They descended Coire na Tulaich on firm snow.

I was out with Freya, Rich and Tom, and with two of the three suffering a bit with a stomach bug, we spent the day in and around Lairig Eilde, looking at snow belays and ropework.

Bit of a thaw on School House Ridge