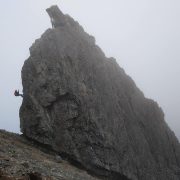 For our second day of our Skye Munros Course, run in conjunction with Steven Fallon Mountain Guiding, Steve, myself and our team tackled Sgurr Mhic Choinnich, The In Pinn and Sgurr na Banachdich.

The weather remained largely dry, but it was definitely cooler and with more clouds than expected. That said, the rock was dry throughout. The team cruised over Sgurr Mhic Choinnich, and up the brown ramp beneath An Stac. The In Pinn, which for many Munroists, can prove to be a bit of a nemesis, was tackled with enthusiasm.

We then skirted over to Sgurr Na Banachdich in good time. It was quite a busy day, with a number of other teams on Sgurr Mhic Choinnich, but we were fortunate to have a clear run up the In Pinn.

Bit of a change in the weather for tomorrow, but with the forecasts not having been entirety accurate recently, it may not be quite so wet tomorrow…

Southern 3 Munros on the Cuillin Ridge