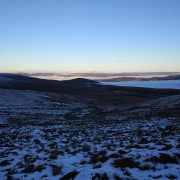 Harry and I decided that a trip over east would be worthwhile to squeeze in a day of climbing before the weather changes this weekend. For this time of year, the crags are well rimed up, and in reasonable climbing condition. Don't expect much in the way of névé though!

We decided to head up to the Mess of Pottage, where we climbed the lesser-travelled Shark's Fin Soup, which takes a fairly direct line, firstly into a short chimney, bound on the right by the shark's fin. The route then follows a series of grooves/mini corners and features a number of awkward steps, often with hard to reach footholds. Fortunately, the gear is pretty good throughout, but solid axe placements were less abundant and took a bit of work to find. The route really is just the one pitch, so we continued up the final pitch of The Messenger, which was also great fun.

Another team was on Melting Pot, and Rich and James looked like they were having fun on Mixed Message.

A great day to be out, and a nice (and early) start to the winter climbing season.

Yet more snow on Ben Nevis!

Another snowy day on Ben Nevis
Scroll to top