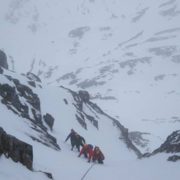 Ken: Bit of a change from a couple of days ago, as the temperatures have crept up, but not excessively so just yet. I was out, working for Abacus Mountain Guides, with Ed, Pierre, Alistair and Stu, who were keen to reach the summit of Ben Nevis via Ledge Route.

Needless to say, there’s still an awful lot of snow in the corries, but a noticeable amount has melted over the past couple of days, particularly on steeper, rockier ground. The recent snows from the past few days had become quite soggy, but beneath the surface, and where scoured by the winds or compressed by traffic, it was still fairly firm and icy. The initial slab and gully to gain Ledge Route was the latter.

The rest of the route was largely softish snow, and with good steps for much of the way. The team did well for their first time in crampons, and took Ledge Route well within their stride. We wondered over to the summit, and descended a soggy Red Burn, which gave a brilliant bum slide all the way to the where it meets the Mountain Track.

It was pretty murky on the mountain today, so hard to gauge conditions higher up, but I would have thought that some of the mid-grade icy routes (those without cornices guarding their exits) would still be ok, routes such as Good Friday Climb, Indicator Wall, The White Line, Comb Gully Buttress, Comb Gully, No. 3 Gully Buttress and Thompson’s Route.

Simply stunning on the Aonach Eagach