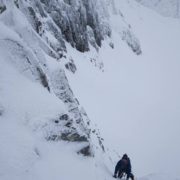 Ken: I was thinking to myself how it would be great if it was like mid-January again, and lo and behold, we woke up to 40cm of fresh snow down to 300m. The amount of snow in the Highlands is quite amazing, and just like for much of January, getting around the mountains proved to be tough going today.

I was out with James, and we ploughed our way up to Dorsal Arete on Stob Coire nan Lochan. James has been up a couple of times this season (and manages to bring some pretty wintry weather with him), and wanted to tune up his housekeeping when seconding (gear, ropework, belaying) so that he could feel more confident when heading out with his climbing partner.

The snow on the route was largely scoured, but with a few avoidable patches of windslab. Many of the rocks are completely buried, and the crux fin had a sharp crest of snow lying on it, giving the route additional grandeur.

Over on Buachaille Etive Mor, Andy was out with Ben on North Buttress. They continued up to the summit and reported good scoured snow on the upper slopes. The snow on the summit, however, was knee deep, and rather than descend Coire na Tulaich, they continued round to the north spur, which is more often than not a safer descent option.

Simply stunning on the Aonach Eagach
Scroll to top