Whilst southern England was getting battered by storm Katie, we enjoyed quite calm conditions up in The Highlands, so calm in fact that it was one of those rare ‘soft-shell days’, although we did get a few drops right at the end of the day.

I was out with Rob, who rather impressively, flew up last night from London, for a dose of winter mountaineering, before flying back this evening.  Talk about a quick hit!  Having not set foot on Ben Nevis before, he was keen to give the Carn Mor Dearg Arête a go, and with very little persuasion, we decided that to maximise the day we would head up Ledge Route, before taking in the summit of Ben Nevis, and descend via Carn Mor Dearg.

Not as quiet on the mountain today, with a number of teams venturing into both Coire na Ciste and Observatory Gully, however, only us and one other team on Ledge Route today.  The route generally had a good cover of snow, except of a thin patch above the Curtain.  It may be worth staying in No. 5 Gully for a bit longer at the moment, before traversing right to reach Ledge Route.  The rest of the route was very good.

The cloud, whilst thin, was enough to a) not give us too many views and b) trap heat in, so unfortunately, not many views from the summit, despite patches of blue sky.  We then continued round the Carn Mor Dearg Arête , which  had just enough snow on the crest to warrant crampons, although the snow was quite soft.  It did turn a bit wintry for a while during the afternoon, but didn’t last long.

It’s been an action packed 24hrs for Rob, who is now on his way to catch a delayed flight from Glasgow.  He’ll sleep well when he eventually gets home tonight!

Teams on Tower Ridge, SW Ridge, 1934 Route, The White Line and a soloist on Hadrian’s Wall amongst others.  Mixed reports as to how safe approaches were today, with at least one team backing away from routes on Goodeve’s Buttress…

Blue sky on the summit 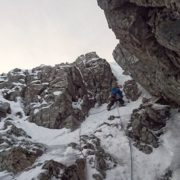