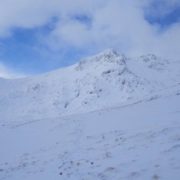 Ken: Today was my final day with Ricci, and as this is all preparation for a forthcoming trip to Everest, with a possible summit attempt, we decided to finish his three days with a fairly big day.

We climbed Sron na Lairig first off, which is always a brilliant journey up an imposing buttress and ridge. The route culminates in a short but very exposed ridge, before tackling a final head-wall, which in current conditions, was quite steep. We then turned right, and headed up to the summit of Stob Coire Sgreamhach, just as the cloud descended on us, and reduced our visibility hugely. We then continued on our traverse of the South Glencoe Munros, and dropped down to Bealach Dearg, before the steady pull up to Bidean nam Bian.

From the summit of Bidean, with almost zero visibility, we had to be pretty careful to find the ridge connecting it with Stob Coire nan Lochan. The skies cleared just as we reached the col. From the summit of Stob Coire nan Lochan, we descended the NW flank of the mountain, and observed a lot of debris from possible cornice collapse above the east facing slopes and around South Buttress. Broad Gully also seemed to be loaded with windslab, and well worth avoiding for the time being.