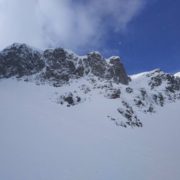 Ken: One of the main objectives for today was to find Hazel a grade IV route, on Ben Nevis, that was away from the crowds. Fortunately, the clouds remained high enough to get a good look around Coire na Ciste on our approach, and it was quite clear that Comb and Green Gully were popular choices.

We continued past three teams queuing for Green Gully, and made our way up to Thompson’s Route, which was quiet. That might be because the ice was a bit variable, but it was certainly good for axes where it needed to be. The ice on the couple of steeper steps was a bit cruddy, but a bit of bridging solved those problems. This was Hazel’s first climb in a couple of years, but she showed no signs of rust as she climbed the route.

We were treated to a grandstand view of Ian Small and Murdo climbing the steep South Sea Bubble on Creag Coire na Ciste. You’ll have to see if you can spot them in the photos!

Plenty of teams making the most of this never ending winter!

More great ice on the Ben