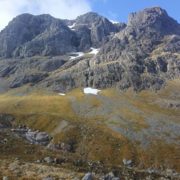 Ken: For Steve’s third and final day, we were back on Ben Nevis, this time we made an ascent of Castle Ridge. We couldn’t have asked for better conditions on the route, with dry rock throughout. We made good progress up the ridge, with Steve enjoying the steep, but positive crux.

On reaching the large bowl part way up No. 5 Gully, we veered right, and traversed onto the top of Moonlight Gully, where we bumped into a couple of keen skiers, who had descended No.5 Gully until the snow ran out. We did have to traverse across a couple of large patches of snow here, but it was usefully soft, but again, having an axe was handy ,if not essential at this point.

And so ends three varied days of scrambling on the brilliant ridges to be found on the west coast of the Highlands. Long may the sunshine and dry conditions continue!