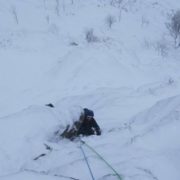 Ken: With a deteriorating forecast (rising temperatures and rain), Keith, Nick and I had a prompt start with the aim of being up and down before the weather worsened and so headed to Gearr Aonach, where we climbed the Zig-Zags Direct. The first pitch was a bit on the soft side, but thereafter, the climbing was pretty reasonable, giving a total of three varied pitches up grooves, stepped slabs and a fun corner on the second pitch. In fact, I might go so far as to say that it is a better climb than Centigrade on Beinn an Dothaidh that we did yesterday. We descended the Zig-Zags, which was very snowy! Caspar and Matt and there respective teams were also on the Zig-Zags, looking at mountaineering and lead climbing skills. Despite a rather poor forecast, the weather this morning was far from unpleasant whilst we were climbing.

Meanwhile, Hannah and her team of budding winter mountaineers were on the hills by the Devil’s Staircase, focusing on winter navigation, which can often be far more testing than navigating in the summer.

Wild in Glencoe!
Scroll to top