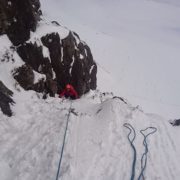 Today marked the final day of both our intro and advanced winter climbing courses. Steve, Chris and Michael had plans for West Face of Aonach Mor but were quickly shut down when the gondola didn’t run. They had a quick turn around and wander up to Stob Coire nan Lochain to get established under Eastern Slant which gave slushy and quite tenuous climbing. They rapped off and retreated to the I’ve factor for a couple hours of coaching on steep ice.

Ken and Ryan went for an icy hit on Ben Nevis. They climbed the Curtain Rail before making an ascent of The Curtain itself. The ice was quite slushy and insecure. Ice at lower levels is on the way out unfortunately buy higher up tue mountain things are still looking promising.

Windier than expected on Stob Ban.
Scroll to top