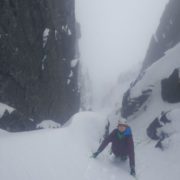 Well, first thing is first, I hope that you all enjoyed a good Christmas and that Santa was kind to you. I was down south for a wee while, but back home yesterday to get stuck into some winter work today. I was out with Tom, Amelia, Adam and Francis from the University of London Mountaineering Club, who are up along with others for their annual winter getaway. The four budding mountaineers I was out with were after a bit of technical training, but their main aim was to climb an enjoyable winter route. 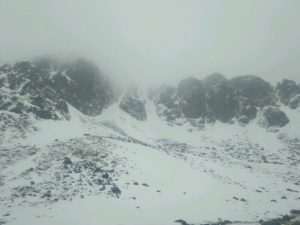 With current conditions (a bit lean and a bit mild), we decided to head high to the snow-sure venue of Stob Coire nan Lochan in Glencoe, with an open mind as to what to climb, and in the end decided that NC Gully would fit our needs perfectly. After spending some time retuning into using an axe and crampons, we had a look a reinforced bucket seat belays before setting up the gully. The team took it in turns leading, whilst I coached them through the process along the way. As all of the team had climbed quite a bit in summer and a bit in the Alps, today was about Scottish winterising their skill-sets. We then walked around the rim of the crag and descended a very snowy Broad Gully. Got to practise going down steep ground as well as going up! 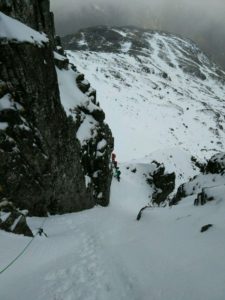 Looking down P1 of NC Gully 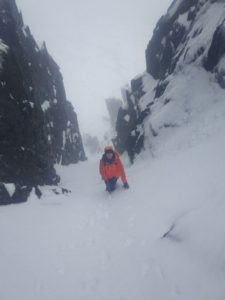 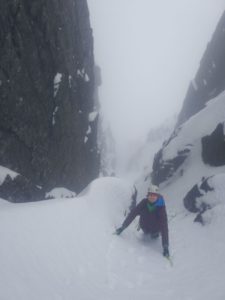 The route was in reasonably condition, with (softening) snow throughout, although narrow by the chock stone. Boomerang Gully, Broad Gully, both variants of Forked Gully, North Gully and Pinnacle Gully were all complete and climbable today. Bit milder and wetter later this week before things start to cool back down over the New Year.