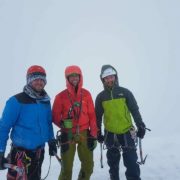 Glencoe Ridges
(Steve): It was my final day with Leanne and Jon who wanted to improve on yesterday’s lead coaching. We decided on Curved Ridge which would allow them to lead a few pitches between the harder sections. On approach it was busy as usual but typically the crowd thins out on this popular route allowing everyone some space. Today however, a queue had formed at the first pitch, not wanting to stand around too much we opted for a tactical retreat with Jon and Leanne taking charge. The afternoon was spent in Glen Nevis learning about rock placements and swinging leads. A fine day to finish off. Andy who was out again for us today stuck with it and enjoyed a great day on Curved Ridge despite the slow start.

Ken was out on School House Ridge where he reported improving conditions. The strong easterly winds were transporting a lot of loose snow and forming cornices and windslab on NW-SW aspects.

Dave and Matt climbed Dorsal Arete with their respective teams, Dave commented on allot of wading but had a great day nonetheless.

Finally, other Dave was out with Tom. They made the fourth West Coast Mountain Guides ascent of the SW Ridge of the Douglas Boulder on Ben Nevis on three days. He reported a fair bit of swimming en route.

We still have space on some of our set winter courses this season.
https://westcoast-mountainguides.co.uk/winter-courses/

Snow beginning to consolidate at mid-height