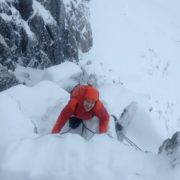 Chris and I decided to continue the theme of climbing snow covered rock by making an ascent of the SW Ridge of the Douglas Boulder on Ben Nevis today.  After yesterday’s ploughing up to No. 3 Gully Buttress, our legs appreciated the shorter approach and the tracks of the team in front of us.  We gained the route at the entrance to West Gully, by traversing across an awkward ledge which is easier later in the season when the floor of West Gully is a bit higher.

The route was as expected, snow covered rocks, some of which were frozen in place, some of which weren’t, but overall, the climb was in great early season condition, which in this case means covered in lots of soft snow.  Chris took well to the steeper and slightly more  sustained climbing found on the ridge compared with No. 3 Gully Buttress yesterday.

Another fine day on Ben Nevis

From the summit of the Douglas Boulder, we abseiled into a soft snow filled East Gully, and waded our way down it.  It’s all very safe in the gully at the moment, and where deep enough, enjoyable and easy on the knees.

Despite a favourable forecast, the north face was relatively quiet, with a couple of teams up by No. 3 Gully Buttress area, one team on Route I and a team ahead of us.  Interestingly, the freezing level did rise quite a bit this afternoon, and was accompanied by moderate precipitation, which I don’t think many forecasts had predicted, however, I doubt that it will change anything above 600m.  It’s still looking very promising for this coming week, with a continuation of cold and calm conditions.

Hannah was also out today with Emily, Chris’ partner.  They enjoyed a winter hill day on Buachaille Etive Beag in Glencoe and even managed to find a patch of firmer snow on which to practise using crampons. 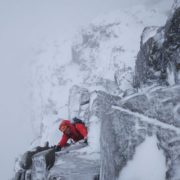 Brilliant day on The Overseer Direct, Cairngorms
Scroll to top