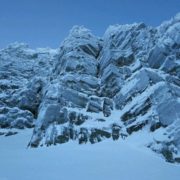 If Taliballan featured in a deck of Scottish Winter Routes Top Trumps, it would score pretty low for the approach to climbing ratio, as it’s about a 3 hour walk-in for a 70m route. Fortunately, it more than makes up for this by the quality and sustained nature of climbing, wilderness, lack of crowds and level of adventure, oh and mobile phone signal.

This is where Hannah and I decided to visit today, Stob Coire an Loaigh, a new venue for both of us. The walk-in is long, but fortunately, with the turf frozen, and snow somewhat consolidated, it was far easier than it could have been. Amazingly, we did see two other people, as we were approaching the crag, but they were walking up to Caisteal.

There’s no opportunity for a warm up on Taliballan, as the first pitch is the crux, but it’s a fairly short lived affair (a short, steep groove with spaced footholds). I’m not sure that the other two pitches were any less cruxy really, as the climbing was pretty sustained and good fun throughout, with just enough gear where needed.

The turf was fully frozen, the cracks reasonably clear of ice, and the crags well rimed, so I’m not sure that we could have found it to be in better condition. I’ll let the photos do the rest of the talking.