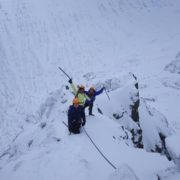 Ken: Robin, Nelly and Jana have made the long journey over from Ireland, for a couple of days of winter mountaineering in the Highlands. We kicked off their trip with an ascent of Ledge Route on Ben Nevis, which was great fun. The snow cover was pretty much perfect, allowing for a swift ascent. We popped over to the summit and descended the Red Burn, which again, has near perfect snow cover for much of the way.

Quite a few teams out, with a number heading up Observatory Gully to Point V and Orion Direct amongst others. We also saw teams on North East Buttress and Tower Ridge, as well as a team retreating from Slingsby’s Chimney, which when lean is the hardest grade II winter climb in the world. Caspar was also out on Ben Nevis, with David. They were looking a snow anchors in Number Four Gully.

Over on Creag Meagaidh, Han and Lena were out for a day of personal climbing and enjoyed great conditions on The Pumpkin V,4. They reported the route to be in good nick with good ice screw placements to be had and lots of chewy ice. There was only one other pair on the route – Josh and John, who were great company at the belays. Han and Lena say a big thanks for letting them go first!

Steve was out with Bridget and Winnie. They climbed the East Ridge of the North Top of Stob Ban, which again, was in good condition. A few other teams out and about there too.