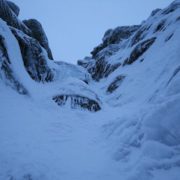 Ken: I was out today with Lukas, who has made the journey (for the second winter running) all the way from Germany to get stuck into some Scottish winter climbing. Plan A was to base ourselves on Skye for a few days, but with strong winds on the cards (more so for there than around Fort William), we decided to base ourselves here, and make the most of what the West Highlands have to offer, given the rather turbulent weather forecasts!

To kick things off, we ventured south, to Beinn an Dothaidh, where we climbed Taxus, with it’s Direct Icefall Finish, and West Buttress. The first couple of pitches up Taxus were fine, but the ice on the direct finish was a bit on the cruddy side. Not enough to spoil the climbing though!

We then descended West Chimney and traversed over to West Buttress, which with its turfy climbing on an exposed rising traverse, made for a nice contrast to Taxus.

Very quiet in the corrie today, with only one other team who also climbed Taxus.

If you fancy being guided on a classic winter climb, such as Taxus, get in touch!
www.westcoast-mountainguides.co.uk