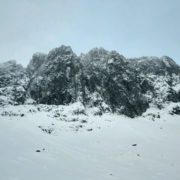 (Steve): I met Matt and Dave in Glencoe this morning as the plan was to head upto Stob Coire nan Lochain. Matt wasn’t feeling too well and so we lowered the aspirations a little and climbing Raeburns Route which had good turf but plastered in unhelpful crusty snow on the initial pitch. The overnight rain had reached the summits so the crags were quite dark first thing, thankfully the temperatures dropped like a hammer through the day and by the top pitch the snow was beginning to firm up nicely.

Ken was also in the corrie with Lucas they climbed Twisting Grooves, which was in excellent condition, with solid turf all the way. After finishing that, they descended Broad Gully and climbed Micro Rib, which lies in the middle of Forked Gully. They took a fairly direct line, sticking as close to the crest as possible. This gave a fairly sustained and interesting climb of two pitches at grade IV,5, which culminated in a short and very narrow snow ridge.